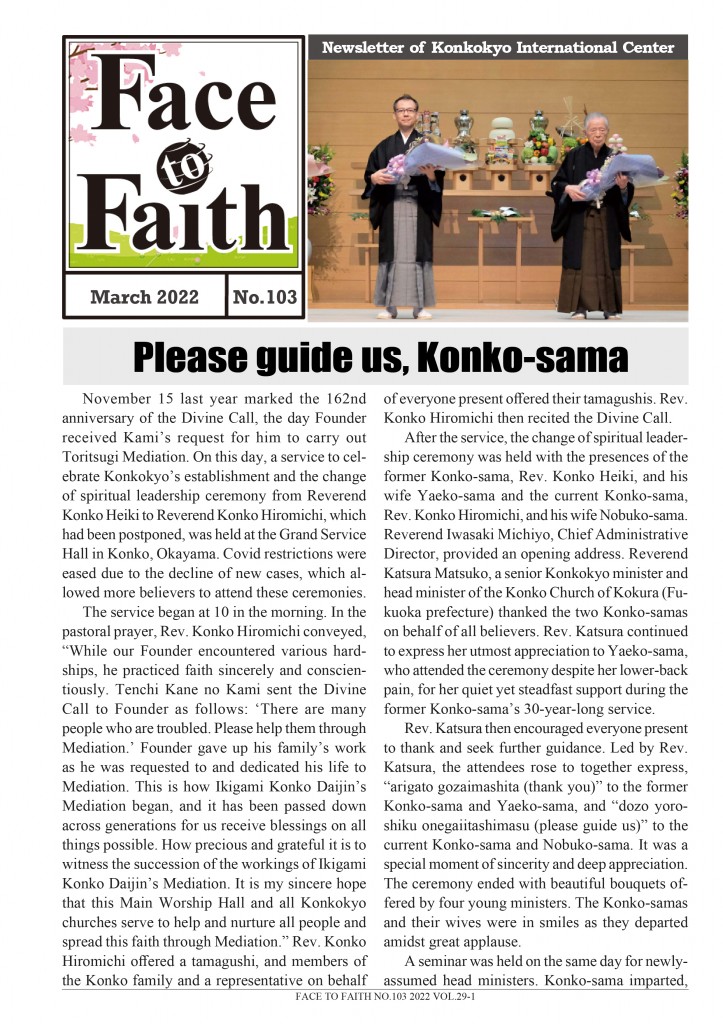 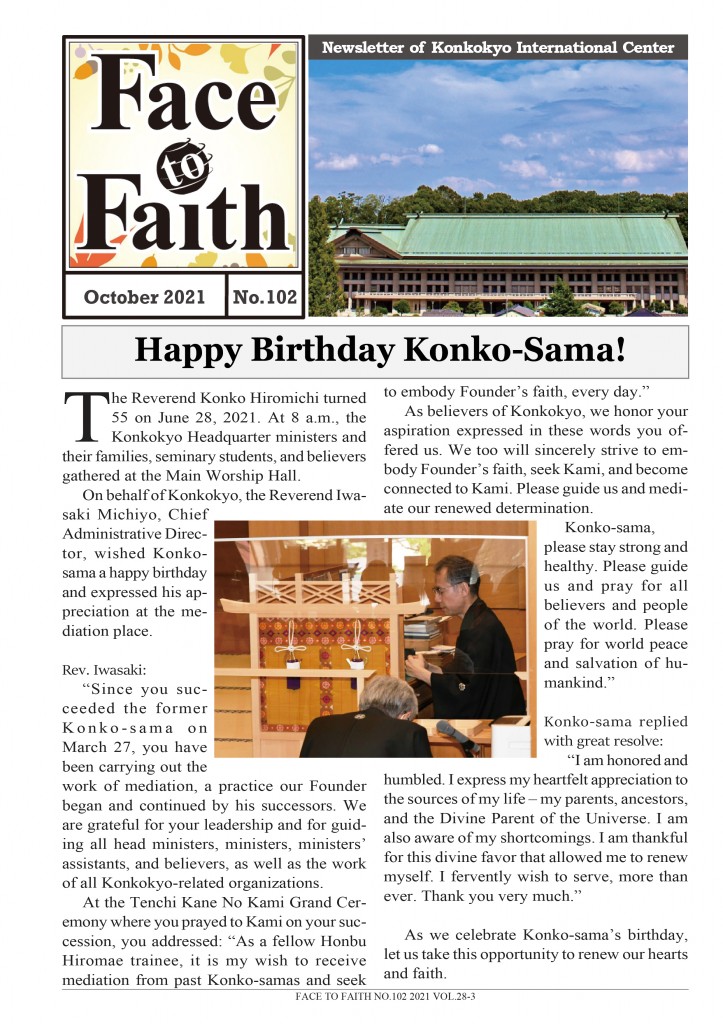 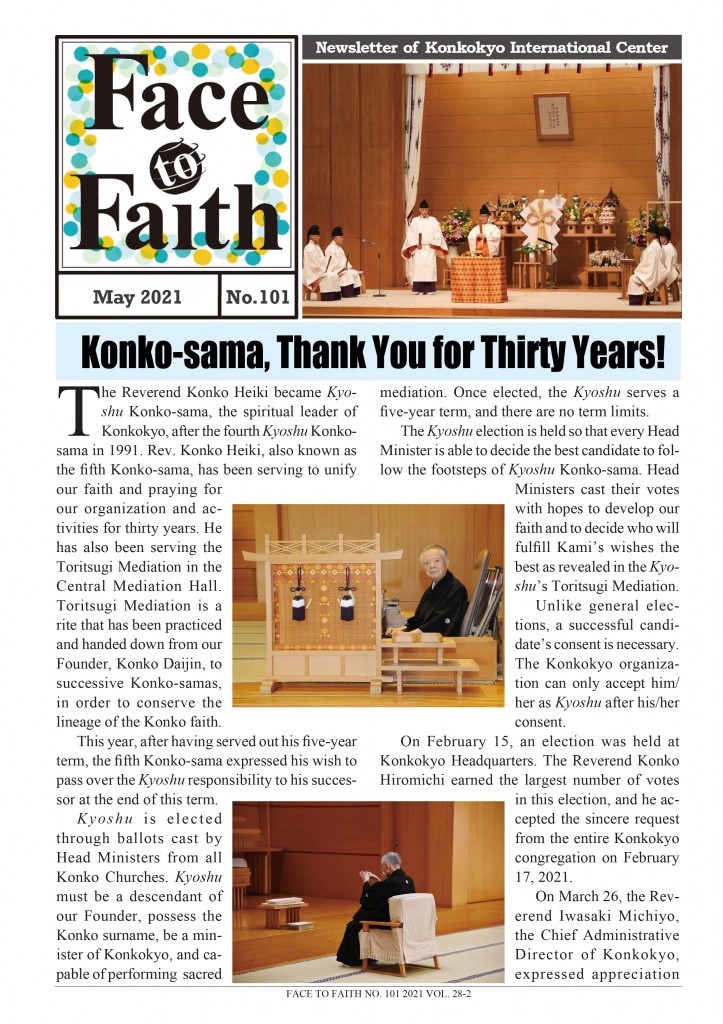 Taught and Guided by the Faith of Our Parents

By the Rev. Nobuko Akedo 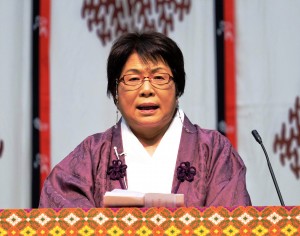 The Faith of My Husband’s Parents

I do goyo (selfless service for Kami/God) at the Konko Church of Sen’nan, located in the far south of Osaka Prefecture, in Japan.  I am originally from the Konko Church of Kinosaki in Hyogo Prefecture.  My father is the Second Head Minister of the Kinosaki Church, and I lived with my parents for the first 22 years of my life.  During my upbringing, my parents taught me to be kind to others, to never stop smiling in difficult situations, to pay devotion to my parents-in-law even if I didn’t really feel like doing so, to ask the senior ministers of the Sen’nan church for Toritsugi Mediation on each of the things I had to do, and follow their guidance. END_OF_DOCUMENT_TOKEN_TO_BE_REPLACED 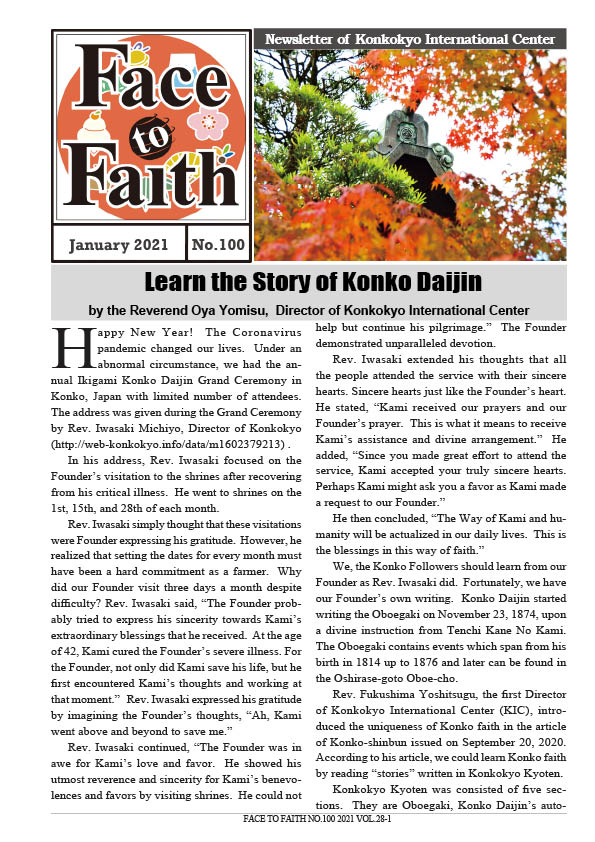 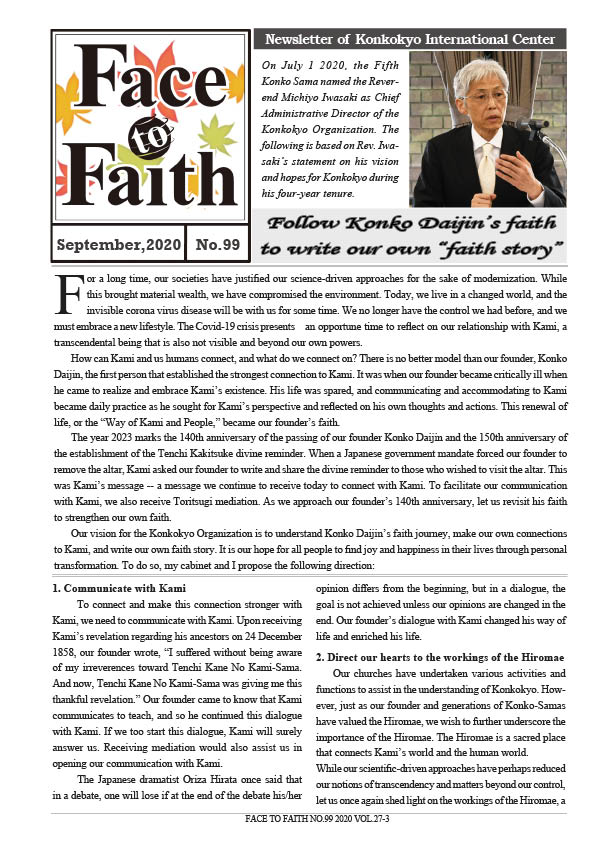 The Faith That I Want to Show Others

By the Rev. Tokinobu Hasegawa

The Father I hated who passed away

More than 10 years ago, when I was a student at the Konkokyo Seminary School, I was working at the First-Aid station near Shūtokuden (Faith Training Center) on the Sacred Grounds of Konko Faith.  It was a day when the main worship hall was holding a ceremony.  Back in those days, I hardly knew anything about the Konko Faith and Konko churches.

One of the Konko ministers I was working with in the First-Aid station was kind enough to tell me about the late Reverend Matsu Hasegawa, the Founding Minister of the Konko Church of Ko’ojimachi.  During our conversation, I was looking at Shūtokuden. More than 10 years later, I am now able to give my sermon right here in Shūtokuden.  This is something I never imagined. END_OF_DOCUMENT_TOKEN_TO_BE_REPLACED 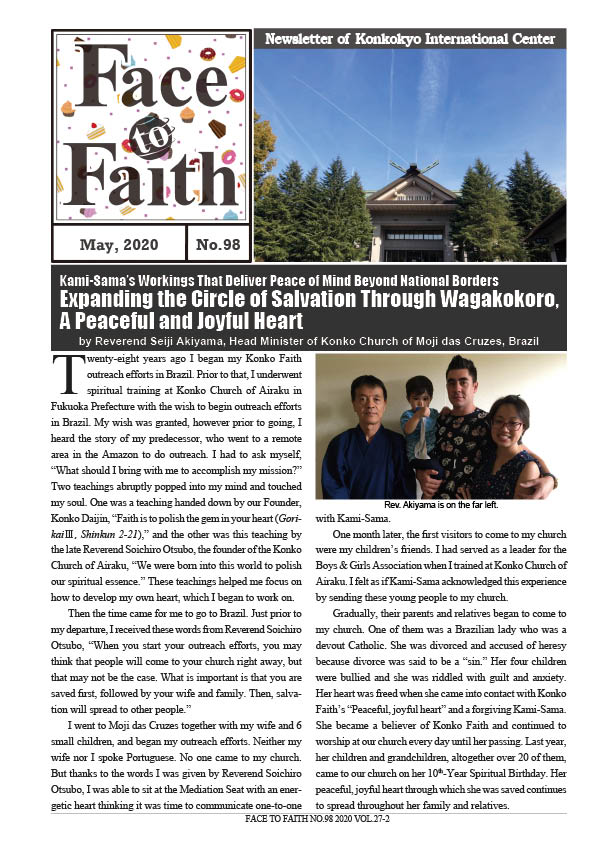 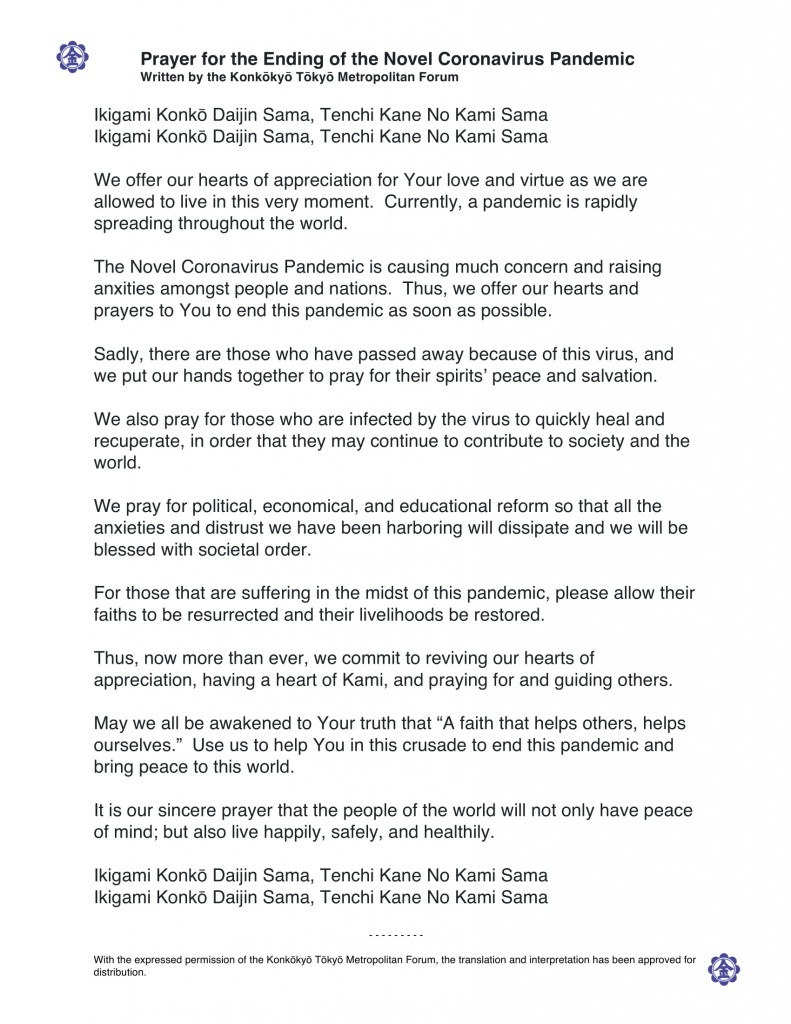 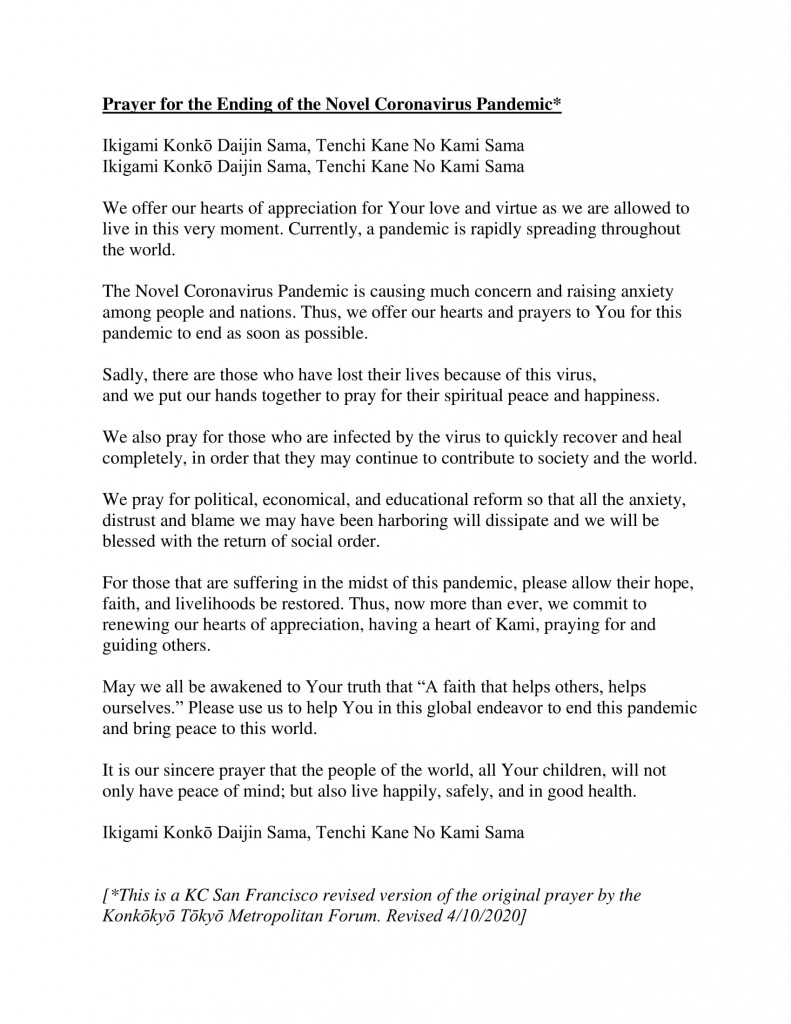 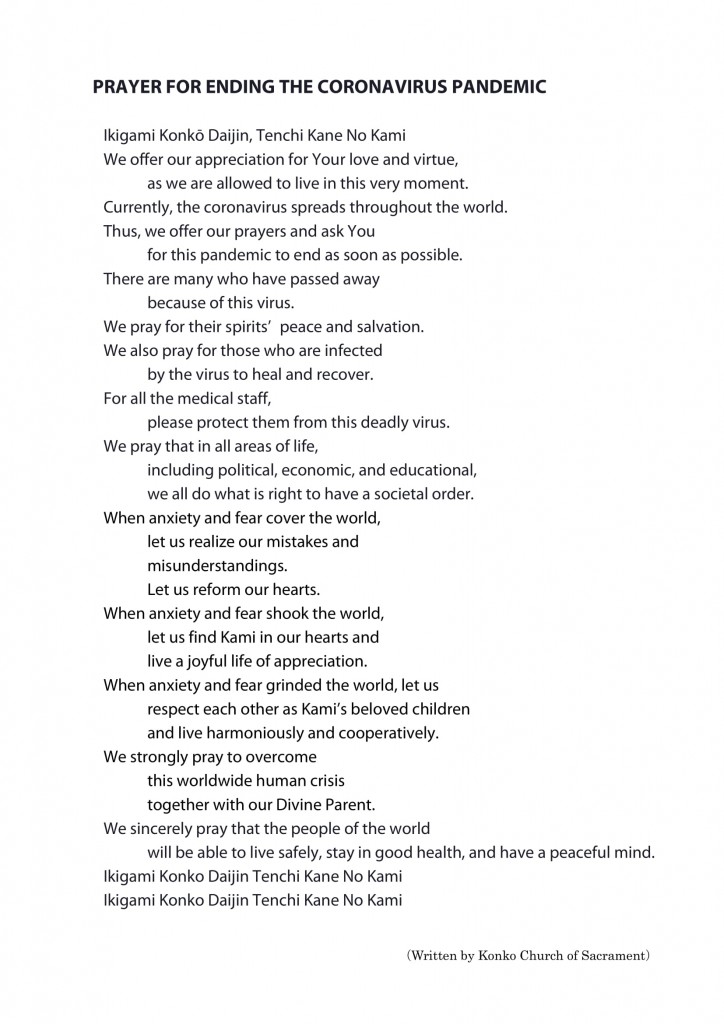 The Konkokyo Headquarters’ Administrative Office underwent departmental reorganization. The new streamlined system has been in effect since January, 2020. A few months have gone by and while we were preparing for the upcoming Grand Ceremony for Tenchi Kane No Kami (the Divine Parent of the Universe), an unexpected situation arose.

Towards the end of last year (2019), China had an outbreak of “A (type of) pneumonia; cause unknown,” which we later heard on the news turned out to be an infection triggered by the “Novel Coronavirus.” I knew that this illness has been occurring “now,” in real time, yet it still seemed like a problem taking place far away from Japan.

However, as soon as February arrived, this virus began to spread here in Japan, too. And we made sure to “gargle, wash our hands and wear masks” at the Konkokyo Headquarters. But this level of personal precautions was soon no longer enough, and on February 20th, the Japanese government issued a “Message To Our Fellow Japanese Citizens Regarding Holding Events.” As a nation, Japan became committed to preventing the Novel Coronavirus from spreading throughout our country.

One day, the mayor of Asakuchi City, (in which Konkokyo’s Sacred Grounds is located) gave us this message, “Please do be careful when you hold a ceremony, since it will probably attract a lot of worshippers.” The very next day, Asakuchi City decided to shut down all public facilities and all events from February 26th to March 15th were cancelled. The news, which initially seemed to be happening quite far from here, was gradually, but steadily encroaching upon us, day-by-day. Now that this disease is exceedingly close, we could not help but feel we were on the verge of a crisis.

Caught in the middle of this pandemic, we were faced with a huge dilemma, “How should we hold the Spring Grand Ceremony for Tenchi Kane No Kami?”

Konkokyo’s Grand Ceremony is not just a regular event or gathering. We, therefore, were fully determined to hold the Tenchi Kane No Kami Grand Ceremony. Furthermore, our mindset was, “Now IS the time when we should pray to our Divine Parent for people’s peace of mind and the end to this pandemic. Now IS the time when we all should receive Kami’s blessings.” We had one discussion after another on this subject, and finally reached an official decision: We will hold the Spring Grand Ceremony at the Grand Service Hall “as usual,” although we will ask Konkokyo believers not to come in person to the Headquarters to attend the Grand Ceremony at the Grand Service Hall. This decision was based upon our unwavering belief that the Central Worship & Mediation Hall should always be open to all people. Why? Because Sacred Mediation has always been available, without interruption, for those who seek it, since our dear Founder served and opened this Way of Faith.

I contemplated this extreme circumstance, recalling how our Founder had to “remove the altar fixtures.”

In Memoirs of Konko Daijin (Konko Daijin Oboegaki), there is a passage, “(In 1873,) having heard a bulletin from the Oda Prefectural Government…this worried my entire family…Summoned by Kawate Iseki, the village chief magistrate, Hagio quickly went to see him. Kawate ordered Hagio to put away the altar fixtures.”

“Removing the altar fixtures” is much more severe than being asked not to hold a (Konkokyo) ceremony. It was an extremely harsh circumstance whereby the Founder’s Sacred Mediation, that began with Kami’s request, was “prohibited” by some rules decided by the “human world.” The Founder, however, did not defy the local government; He didn’t say, “My service (goyo) at this Mediation Hall is strictly between Kami and me, and it is none of the government’s business.” Instead, the Founder accepted the local government’s ban, while doing his best to revere Kami. Furthermore, the Founder was so cooperative with the government that Kami praised him by saying, “You have shown sincerity even to the government.” The Konkokyo Organization of today has a role to play, as a group of people within society. I am deeply grateful to our dear Founder for having already set down guidelines for us to follow.

There are even more significant events than “Removal of the Altar Furnishings” that the Founder later encountered, such as: “The Divine Reminder (Tenchi Kakitsuke)” was born, the position of the Mediation Seat (Okekkai) became fixed, the true nature of Tenchi Kane No Kami as a divine being was manifested, and the Divine Parent of the Universe (Tenchi Kane No Kami) eloquently stated that Kami sent Ikigami Konko Daijin (the Founder) to the “human world.” One vital Konkokyo element after another was revealed in 1873, when our dear Founder faced his biggest challenge in his endeavor to help save people. When I think along these lines, it seems to me that the incident of “having had to put away the altar fixtures” was not brought about through societal pressures in those days. Rather, it may very well have been something Kami arranged to happen, as an inevitable event. After the Founder withdrew to another room, following the local government’s order, I wonder what his thoughts were and how he turned to Kami.

The coronavirus is testing us…it is prompting us to consider how to turn our hearts to Divine Parent Kami. We should not only pray for the containment and end of this virus, we should ask ourselves, “NOW, at this CRITICAL TIME, ‘How should we direct our hearts to Kami?’”

(By the Reverend Yumi Asano, Outreach Department Director / Foreword for the April 2020 Issue)